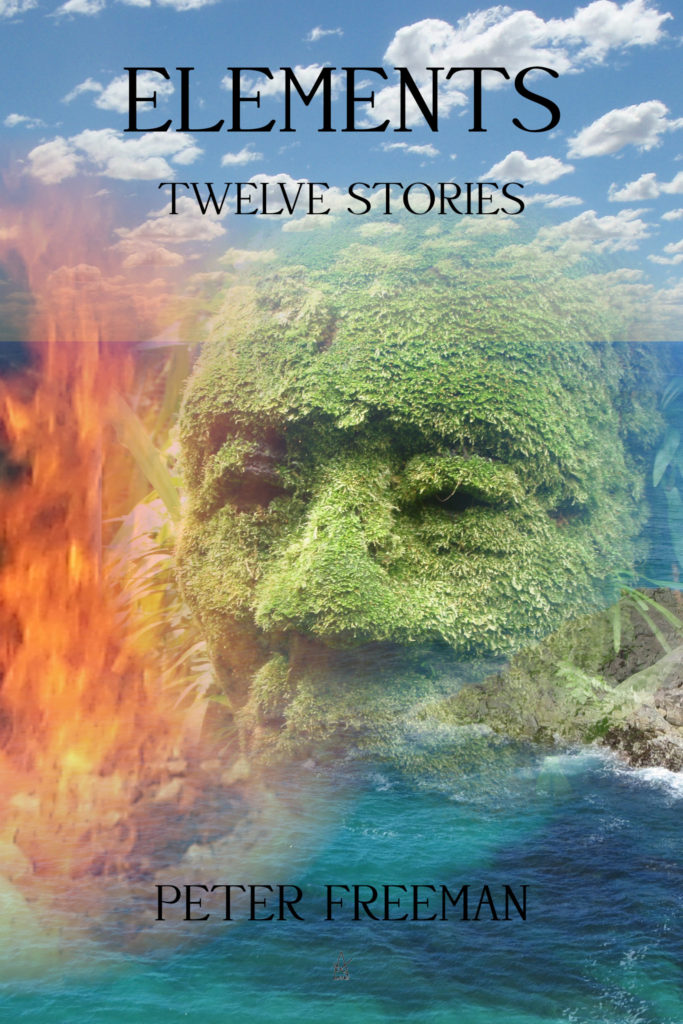 Elements is a collection of  stories in groups of three stories aligned with the four classic elements.

Benjamin, Anthony, Noah, and Hannah are four young skateboarding friends who get together frequently to skateboard and just hang out. Benjamin is consumed by the concept of time travel. His friends engage in many conversations discussing the ramifications of time travel and the risks it entails when paradoxes are invoked and the space-time continuum is disrupted.

A couple of decades later, the four friends meet at a high school reunion and share their life stories. Benjamin and Hannah have married each other and Anthony and Noah are surprised by their youthful appearance. Anthony gets a glimpse of an unusual device in Benjamin’s backpack and notices Benjamin is reluctant to show it or discuss its purpose.

Benjamin and Hannah leave the reunion and head out ostensibly to catch a taxi. After they have left, Anthony and Noah realize they should have asked them for their address and run after them. Anthony spots Benjamin and Hannah close together in a small park, turns away for a few seconds. When he looks back they have disappeared.

Sean is a political activist imprisoned for five years for encouraging members of the armed forces to refuse to obey orders if those orders go against their conscience. He is put in a cell with Donny, a murderer who is facing ten years of incarceration. When Sean finds out that Donny did not get adequate legal representation, and he killed in self-defence, Sean helps Donny to lodge an appeal.

Donny is successful and is released with time served for the lesser crime of imperfect homicide. Some years after Sean is released, he is surprised by a visit from Donny who has come to thank him. Donny has turned his life around, is married and has children.

Peter is a small boy who is bulled by two of his school mates. He runs home only to find an uncle he has never met in his home with his parents. The uncle decides Peter needs to learn to defend himself and bullies him into learning to box. Peter fails at it and his uncle leaves. Peter hides out the rest of the day before cautiously returning home.

The next morning, the uncle runs from the crawlspace where he has been lodging because he saw a large rat. Peter and his father go into the basement to catch the rat. The uncle runs away when he is asked to assist. Peter catches the rat with a broom and holds him in place until his father can kill the rodent. The uncle leaves and Peter is commended for his bravery.

Halim is an engineer who was living in a village in Sudan which was attacked by rebels. Halim was knocked unconscious by a soldier and falls into a place where his body is concealed. The men were killed and the women and children were herded away. Halim was welcomed into Canada as a refugee and his new friends Daniel and Jasmine sponsor him to becomes a Canadian citizen.

Halim returns to the Sudan to search the refugee camps for Eufrasia, his missing wife. He is unsuccessful and returns home to Canada. Halim arranges to meet with his two friends Jasmine and Daniel while waiting for a ferry to an island where Halim lives. Halim tells his friends the story of his childhood with Eufrasia where they would pass secret messages to each other using a dolls head embedded in the mortar of the village well.

The #MeToo movement causes Thomas to remember an incident from his youth when he dated raped Susan a woman of his own age. Thomas wants to make amends so arranges with Susan to meet in a park. She arrives accompanied by her friend Jenny, who sits within eyesight of Thomas and Susan. Thomas slowly recounts what he remembers of the incident while Susan angrily fills in the missing details. At the end of the meeting, they come to a kind of reconciliation.

Divine justice is oddly and unexpectedly delivered after Luke, a lonely twelve-year-old boy working at the local church to earn money for his mom, is assaulted by the new parish priest once Luke finishes setting up an anonymously donated computer and virtual reality bible study program for the priest.
While testing the virtual bible study program, Luke discovers a secret world inside the virtual world. A week after Father O’Brian assaults Luke, the priest asks a shattered and numb Luke to show him how to use the VR gear. Luke emotionlessly guides him into the secret VR world at Father O’Brian’s direction where the priest disappears from both the VR world and the real world. A lightning strike from an approaching storm cuts the power to the church and the computer goes dead. The priest is still gone. Instinctively, Luke removes the VR card from the computer and throws it into a dumpster, taking back control of his life. The priest is never heard from again.

Elliot has invited his graduate student Samantha to his house on an evening that Elliot’s wife Monique will be at a play with her female friends. The two plan to start an affair. Monique’s friends contract the ‘flu, so she stays home. Samantha arrives, Monique answers the door, and after some confusion and cover up, the three sit down to a meal. Monique and Samantha engage in an animated conversation that largely leaves out Elliot. The two women find that they are drawn to each other. At the end of the meal they head out to a coffee shop to continue their conversation in a more intimate way leaving Elliot alone in the house.

Tommy’s grandfather tells him the story of his youth when the town was controlled by Mr Johnson, a crooked business man who controlled and terrorized the town. Mr Johnson carried a beautiful throwing knife plated in gold and used it to threaten the townsfolk into paying exorbitant rents on properties he owned.

One day, a poor farmer with sick and starving children refused to pay his rent. He came to town and threatened Mr Johnson with a .22 calibre rifle. Mr Johnson flung his knife towards the farmer, catching him in his throat and killing him.

Maria is a beautiful young woman who is accosted by Mr. Johnson.  Her father comes to the rescue and is challenged to a knife throwing duel by Mr. Johnson. Her father agrees and is allowed time to build himself a throwing knife. The knife is huge and takes a long time to build. With the help of Maria’s brothers, the family starts to thrive and create new business as townsfolk support them.

The day of the duel arrives with unexpected results.

Three mountaineers arrive at a shelter during a snow storm.  They had early been struck  by an avalanche with Jason, the fourth member of their party  missing.  David, the leader faces recriminations from Bradley who slowly begins to usurp David’s leadership position as Robert  looks on.  Bradley is about to assume the leadership role when Jason turns up in good health.

Four friends discuss choices  in a nightclub when one of them reveals she is pregnant.

A man in a doctor’s waiting room ponders life.

When an aggressive water bottling corporation tries to drain the water from a Salt Spring Island aquifer and ship it to their plant in Puget Sound, locals catch on to what they are doing. A newspaper reporter gets on the trail and with the help of a senior citizen, a waitress and the the wife of an earth moving contractor, steadily unearths the dangerous plan.

The corporation sends its best fixer who forces its engineer into concealing their true intentions. The MLA for Salt Spring Island is unwittingly recruited by this wily and manipulative fixer who will stop at nothing to achieve his aims.

Ultimately, this fixer’s determination to win at all costs, regardless of the trail of compromised people he leaves in his wake, becomes his downfall.