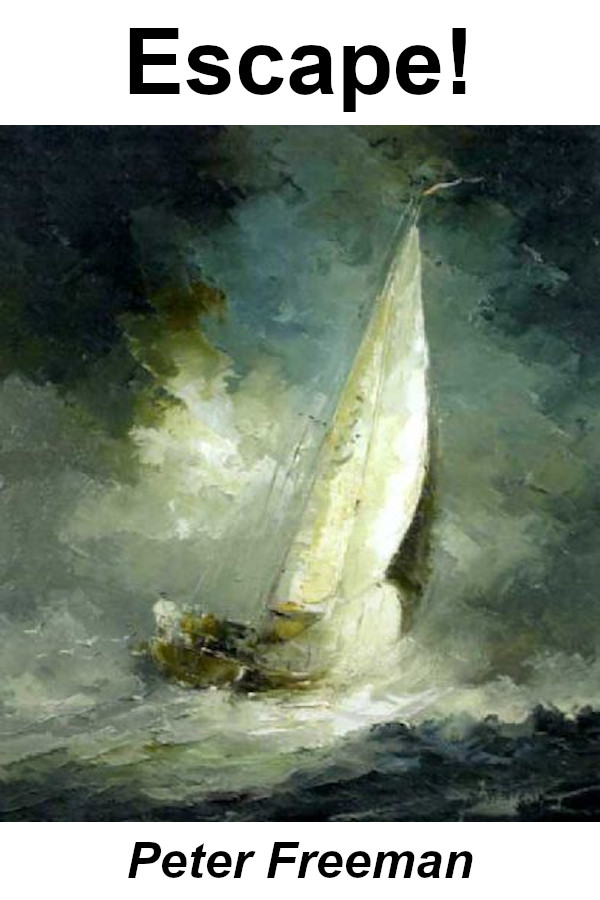 Escape! is the story of Greg thwarting the occupiers to finally escape their clutches and reach open waters outside the west coast of Canada. Their problems do not end there as they battle storms, diminishing food and water supplies, and failing health.

Gregory Peckingham is an experienced offshore skipper who is engaged by Marcus Goldwyn to take himself and ten of his family and friends on his thirty-eight-foot sailboat to sanctuary in New Zealand after Canada is annexed by a foreign power. When they reach Canada, they have a further problem of being accepted as refugees and what do with the boat that has brought them to safety.

“Are you Gregory Peckingham?” the well-dressed man asked.

“Yes. Who wants to know?” answered the man who was hand-sanding the hull of a large motor cruiser sitting among a half-dozen boat at the rear of the dusty parking lot behind the marina. He was not particular tall, around average height, wearing a soiled pair of dark blue coveralls with an old, cream-coloured cloth cap over his head to prevent dust from infiltrating his hair.

“My name is Marcus Goldwyn. I was wondering if you can do something for me.”

Greg looked over his shoulder to see Marcus standing with his legs slightly apart. He wore a black dress shirt, open at the neck, with light-grey trousers and jacket. A wide, black belt with an embossed pattern of large, vertical lozenges with black buckle enclosed his waist. Marcus was a neat, trim man with a fitness that came, not from hard work, but from regular gym sessions. He was close to six feet in height, clean-shaven, and in his early forties. He was good-looking with a strong jawline, clear eyes, and an unblemished face. He looked like a model used to sell expensive yachts; the kind with the rugged sea-faring look…and hands of a bank clerk.

“I understand you’re a sailor?”

“And you’ve been offshore?” Marcus said.

“I don’t quite know how to say it…I have a sailboat,” Marcus explained.

“You need a skipper?”

“What do you mean by that?”

Greg looked around and noticed a man casually making his way towards the sailboat chocked and standing on its keel nearby.

“Would you like to carry on this conversation in a more private setting?”

“Yes, that would be good,” Marcus said.

“I’ll tell you later. Help me carry this rubbish over to that container,” Greg said.

He indicated the pile of old broken pallets scattered around the hull. Together, they lifted what they could carry and Greg led Marcus over to a large, steel container used to discard the rags, old sandpaper, and rotted wood accumulated from boat work. After they dropped the wood beside the steel container, Greg sauntered back with Marcus.

“You know it’s illegal…what you want me to do.” Greg said.

“I’m guessing you want out. Am I right?”

“Am I that transparent?” Marcus asked.

“I wouldn’t play poker if I were you.”

“I said, it depends. First, let’s get some things straight. I’m not your buddy. I want you to spend the least amount of time with me as is necessary. You got that?” Greg said.

They picked up another load of pallets and walked with them towards the trash container. As they carried the load, Greg continued his conversation.

“Now don’t interrupt me,” he said in a low, growling voice. “Here’s what you’ll do. You’re going to engage me to move your boat from wherever it is to Canoe Cove. You’re moving it there because you want to anchor it out to save money. I assume you’re paying for moorage?”

“I said, don’t interrupt. We have only a little time before this will look suspicious, got it?”

“Wait a week and then ask my boss to contact me. Tell them someone told you I was available for small jobs. Show some concern that you want to make sure I’m trustworthy, but reluctantly give in. Let him tell me all the details about the boat. Make sure you give him your phone number, so I can contact you when I get to Canoe Cove. You got that?”

“Jesus, you don’t learn very fast, do you? Now piss off. I don’t want to see you again until I get your boat to Canoe Cove. I’ll contact you.”

Marcus stopped walking and stood there confused. Greg continued to walk back to the boat on which he had been working. He picked up the sanding block in his wide hands and began to rub the hull methodically. After a few seconds, Marcus turned and walked out of the marina yard.

Greg had been working for about five minutes when he saw the shadow of a human figure fall across the part of the hull on which he was working. He ignored the presence of this unknown person and continued to sand the hull.

“You been working here long?” the stranger asked Greg.

Greg stopped sanding and turned around to face a tall and slightly obese middle-aged man, dressed in well-used casual clothes of a nautical style that would easily place him as a successful boat-owning businessman. He had a hard look at odds with his clothes. His wide, rough face, broken nose, and stance gave him the look of someone not shy of using his fists to make a point. Greg put his free hand on his hip and gestured angrily with the sanding block in his other hand.

“You wanna talk? Then you work and talk. I don’t have time for idle chit-chat. I’ve got to get this hull finished today. You want to help me carry this shit-wood over to the trash container like that other idiot time-waster? After a couple of loads, maybe you’ll get the message too. He didn’t last too long!” Greg said, turning back to his work.

“Who was he?” the stranger asked in a hard voice.

“How the fuck should I know?”

“Seen him before?” the stranger asked.

Greg stopped sanding and turned around to face the stranger again.

“You don’t need to know. You’ll see me around.”

The stranger turned and sauntered away. After a few moments, Greg gave an obvious shrug and resumed his sanding, feeling the tension in his body slowly subside as the effort burned the adrenaline out of his veins.